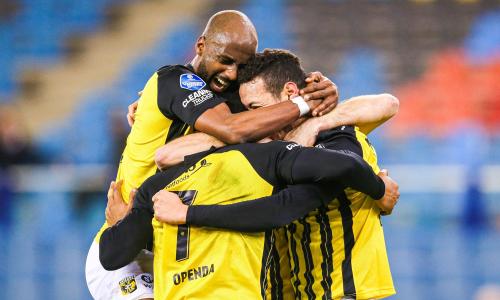 Johannes Spors has spent considerable time immersed in football club alliances. As head of recruitment within Red Bull’s operation, he watched players move from Salzburg to Leipzig as outsiders screamed in horror. There was grumbling, too, as Chelsea sent 28 loan players on loan to Vitesse Arnhem following Alexander Chigirinsky’s takeover of the Dutch club. The numbers have diminished vastly but Armando Broja, a 19-year-old striker, has been temporarily – and successfully – dispatched to Arnhem from Stamford Bridge.

As Vitesse’s sporting director, Spors is accustomed to questions about Chelsea. “The background is simple,” he says. “The [Vitesse] owner is one of Roman Abramovich’s best friends so that comes from a direct friendship. There are no contracts or satellite club agreements or whatever; this is two independent clubs who have had a good connection in the past through loan players.

“We have had great cooperation from Petr Cech [Chelsea’s technical and performance adviser], we speak very often, and that gave me the opportunity to speak with Broja. I had to fight to convince the club and the player. It wasn’t like: ‘Here’s a list of players, take who you want.’ Loans can give us a raise in quality with players we cannot afford to buy. We have also loaned from Juventus, Brugge, Fiorentina.”

But what of a reverse scenario, whereby Chelsea cast admiring glances towards one of the talents in Vitesse’s squad? “I would definitely open the door for them to talk about it because we have that good relationship but the market determines a price,” Spors says. “They don’t give presents to us and we don’t give presents to someone else.”

Recruitment, such a fundamental part of Spors’s role, is about to be affected by Brexit. The situation is particularly notable in the Netherlands, where non-EU players can be signed only when at a premium salary level, albeit reduced for under-20s. “A lot of people aren’t realising this all happens in January,” Spors says. “I’m still getting a lot of contact about taking young English players. I have to tell people that just isn’t possible. I think a lot of people will have a hard confrontation with the new rules, especially until things settle down. We can’t just take any English player we want.

“The biggest player in the market [Premier League clubs] is suddenly in a difficult situation. It will also be in the business plan for some small teams to sell these players at an early stage.

“ It can really be a game-changer. At the moment, a lot of young talent from Holland and Belgium leave for English academies at an early age. That won’t be possible any more, they’ll have to stay until at least 18 and even then they have to meet the points criteria. For us, other countries – Germany, France – should become stronger in this market as England can’t pick up this talent.”

Spors’s own journey is fascinating. At 38, he is the youngest sporting director in the Eredivisie and the only one without a professional playing background. Vitesse hired him on that precise basis. “They wanted someone who had worked themselves up to this position,” he says.

This year came Spors’s first key decision; to find a head coach. His fellow German Thomas Letsch – also formerly of the Red Bull network – was hired; by early December, Vitesse sat second in the table and now they are behind third-placed Feyenoord on goal difference.

“I made it clear, I am standing for a certain playing style,” says Spors. “It is intense. If you compare to the Premier League, more the Klopp direction than the Guardiola direction.”

Spors was a student in Heidelberg when asked to produce video analysis for Hoffenheim. As the club grew under Ralf Rangnick – from Germany’s third tier to the Bundesliga – so, too, did Spors’s involvement. He spent five years as head of first-team match analysis before leading the scouting department. That role, he insists, shouldn’t be as difficult as many portray.

“Most important is that the club has a clear strategy,” Spors says. “You have to make clear the way the club wants to play and the definition of the position needed. The scout can only deliver quality when this is clear by profiling. Very often that clear profile or the analytical work is the problem.”

Spors is defensive, understandably, of the Red Bull method. Salzburg and Leipzig can no longer work in tandem because of Champions League involvement, which perhaps illustrates its success.

“In terms of a development plan for a player, the environment is perfect,” he says. “They had important role models like Naby Keďta: Salzburg to Leipzig to the Premier League. It’s very important for the development of a young player to be at the right level at the right time. Red Bull could always offer this – perfect levels for young players.

“From a business point of view, the model makes sense. When you want to be competitive at the highest level, you need a big platform. What made Red Bull strong all the time was smart recruitment of young players to develop. They created value.”

Logic suggests Vitesse will finish this season behind the powerhouses. Yet the club’s trajectory is striking. “Qualifying for Europe would be a massive success because that isn’t easy in Holland,” Spors says. “We have to work harder, think smarter. We are spending less money than before but Europe is possible with this young, energetic team.”