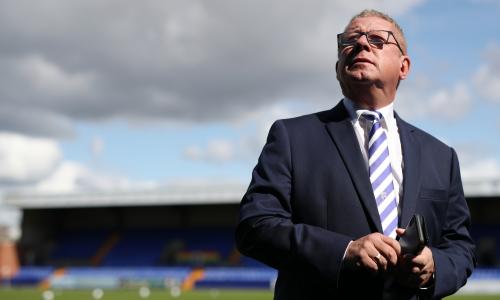 Premier League clubs have been urged by the Gillingham chairman, Paul Scally, to pay Ł2.5m each into a solidarity fund to help some of the English Football League’s most vulnerable clubs as the game’s authorities discuss how to cope with the financial implications of the coronavirus crisis.

Scally said such funds would help League One and League Two clubs contend with unprecedented losses of income and believes the crisis will prove “a time of reckoning” for the sport. Conversations between the Football Association, Premier League, EFL and the Professional Footballers’ Association to determine realistic and sustainable solutions are continuing.

Before the EFL’s emergency meeting last week, Scally sent a letter to the league’s chairman, Rick Parry, suggesting they should lobby top-flight clubs to ease cashflow concerns with all matches suspended.

Gillingham of League One have around 300 staff and a wage bill of Ł400,000 a month and Scally said he did not anticipate playing before crowds in the next three-to-six months. Gillingham’s highest-paid player gets around Ł3,000 a week, the lowest Ł250 a week.

The EFL has agreed a Ł50m relief package comprising the remaining TV and sponsorship money due to clubs at the end of the season, and has made available loans of next season’s first payments. Parry has said he is “not a fan of the begging-bowl culture” but Scally is adamant lower-league clubs require further financial assistance.

“One of the solutions would be if we could approach the Premier League and ask each Premier League club to put Ł2.5m per club into a solidarity fund for League One and League Two,” Scally said. “That would give us about Ł50m and that Ł50m would probably get those League One and League Two clubs through the next three months, with what they are losing.

“When your income is between Ł150m-Ł250m or more, I’m sure Ł2.5m per club to help the pyramid of football get through this very difficult time is not going to break the bank for most of those clubs, but that is a discussion that Rick Parry I’m sure will be having in conjunction with the head of the Premier League and the FA.

“I’m not looking to go begging with a cap because that’s not what we should be doing – I agree with Rick on that because we have to look at our own businesses and see how we can realign them – but even after we’ve realigned our business I’ve got no income. I’m not looking for begging, I’m just looking for those within our industry that could support us and could generally support clubs that are run properly and not just siphoning cash on stupid stuff, to make that gesture.”

Scally, the chairman of Gillingham since 1995, said top-flight clubs were not immune from the crisis – “take the top six out of the Premier League and I suspect it’s not quite as rosy as everyone is painting it” – and warned that coronavirus also threatens to have serious repercussions for big-spending Championship sides.

“In some ways this is a time where we need to look at football as an industry, because it’s completely out of control, especially in the Championship. The Championship has owners that are content to lose collectively Ł700m over the last three or four years; that cannot be a sustainable model. If any good comes out of this awful situation, as an industry, maybe it is time we looked at and reflected on our business and said: ‘We have got to realign our business into something that is normal,’ if ‘normal’ is the right word, because clearly clubs losing Ł50m a year is not normal.

“I think it’s D-day for the industry, a time of reckoning for football. They always say it takes a crisis for people to realise where they are in life and maybe this is the time that football needs to look at itself from top to bottom and realign itself. I do fear for football but in any crisis sometimes you come out of the other end stronger collectively and individually and I’m hoping that is what is going to happen.”

Scally welcomed the EFL’s Ł50m financial intervention but warned that advancing income is only a short-term solution. “The truth of it is that 80% of that money goes to the Championship, 12% to League One and 8% into League Two. But that is already our money – that’s money we have got in our cashflow for April, May and June.