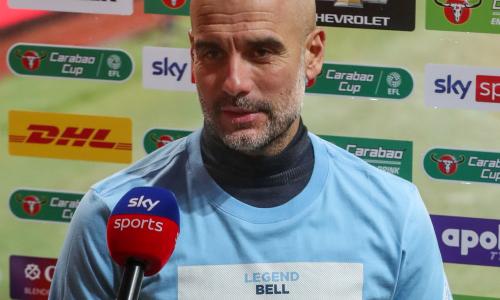 Pep Guardiola dedicated Manchester City’s Carabao Cup semi-final win at Manchester United on Wednesday night to one of his club’s enduring luminaries, Colin Bell, who died on Tuesday at the age of 74.

“It’s an honour to dedicate this victory to Colin Bell and his family,” said City’s manager, wearing a “Legend Bell” T-shirt in tribute to the former England midfielder as he celebrated leading his team into a fourth successive League Cup final.

“He helped to build something special for this club. It’s an incredible victory for us to beat United away and it was for him, absolutely. When Colin Bell has a stand at the Etihad, when his name is the King [of the Kippax], it’s because he was something special.”

Appropriately, City’s performance was one of which Bell would have very much approved. “When the team has this mentality they can do something incredible,” said Guardiola. “It’s not the Champions League but four times in a row to reach the final – I’m so impressed.”

Second-half set-piece goals from the renascent John Stones and Fernandinho ensured Guardiola will renew his rivalry with Tottenham’s José Mourinho in the Wembley final on Sunday 25 April and City’s manager believes his side are finally hitting their stride.

“It’s about the consistency,” said Guardiola. “We didn’t have a proper pre-season and that’s why we needed a little bit of time but I think we’re already there. Tottenham are a top team but we will be in the best possible condition for the final.”

He reserved special praise for Stones. “All credit to him,” said City’s manager. “Unfortunately he struggled longer than we expected and he expected but his comeback is absolutely down to him. Hopefully he can continue in this way.”

Ole Gunnar Solskjćr was a mixture of magnanimity, disappointment and frustration as he reflected on his fourth semi-final defeat in the Old Trafford manager’s office. “We played against a very good Manchester City side and they deserved to win,” he said.

“They played well and when they play well you have to play very well to beat them. We were just lacking that little bit. It’s not a mental thing [losing four semi-finals]. Sometimes you meet good teams in the semis. At the moment City are probably the best team in England.”

Even so United’s manager was unhappy to concede twice from set pieces. “City can score many great goals. You have to accept that. When you concede two simple set plays it’s very disappointing. We just weren’t good enough.”