Marching on together: Bielsa and Leeds show team spirit as wait goes on 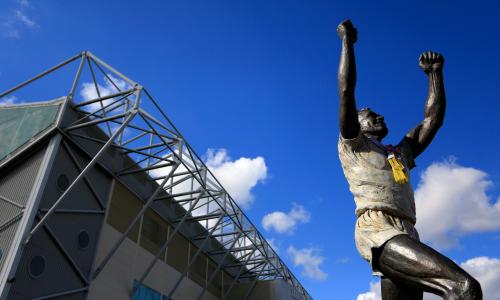 The plinth supporting the landmark statue of Billy Bremner outside Elland Road bears a simple, yet evocative, message. “Side before self, every time,” it declares, reminding everyone of the former Leeds United captain’s personal mantra.

In a very different way and a very different context, Marcelo Bielsa’s Leeds are now showing they are every bit as big on teamwork as the trophy-hoarding, no-quarter-given Don Revie side Bremner led with such a memorable mixture of finesse and ferocity.

The Championship leaders’ reaction to being stuck in a coronavirus emergency-induced holding pattern with the Premier League clearly visible on the horizon has been impressively mature and measured. On Thursday Bielsa, his players, senior coaching staff and club executives accepted a wage deferral in order to protect the jobs and incomes of 272 less well remunerated members of the club’s backroom staff and its army of casual workers. Other teams are now expected to follow suit.

Bremner was aptly described as “10 stone of barbed wire” on the pitch but he would surely have approved of the current Leeds captain Liam Cooper’s role in negotiating an arrangement designed to prevent the loss of homes and livelihoods. In the absence of the customary 35,000 matchday crowds at Elland Road Leeds are, according to their chief executive, Angus Kinnear, losing “millions of pounds” per month.

With a Ł40m annual wage bill becoming unsustainable, first-teamers have agreed to their wages being temporarily capped – a reduction to a sum in the region of Ł6,000 a week was discussed in recent days – leaving the balance to come when normality is finally restored. While the average Championship salary is around Ł12,000 per week, Bielsa’s top earners, Patrick Bamford and Kiko Casilla, command around Ł30,000.

Never in Leeds’s 16-year top-flight exile has it been more imperative to secure a Premier League return, with its attendant, Ł100m broadcast revenue-funded cash infusion. However, given the lives being lost and the economic crash, the club is not about to feel sorry for itself.

Top of the second tier and seven points clear of the play-off places with nine games to go, the players could be forgiven for feeling like weary travellers left circling their destination in thick cloud. An awful lot of hard work – mental as well as physical – has gone into reaching this position but the bigger picture has been grasped.

Cooper and company can only hope the Elland Road larders will be refilled and the season eventually concluded with the team still in the top two. No one wants the current campaign to be voided, with promotion and relegation either suspended for a year or Leeds and second-placed West Brom becoming part of a temporarily extended 22-club top tier. Not playing is bad but the uncertainty about what happens next is worse.

Or at least so it initially seemed. Daniel Chapman, co-editor of the Square Ball fanzine, encapsulates a now almost unimaginably altered mood among the fans.

“Two weeks ago the idea of calling off the season had everyone saying ‘Typical Leeds’,” wrote Chapman in the Yorkshire Evening Post. “That’s gone. Any defiance the mirror now shows is mostly wide-eyed fear as I think less often of promotion. The death tolls from Italy are of a scale that can be mapped on to blocks of seating at Elland Road. The notion of the virus being ‘typically Leeds’ seems absurd now that we can appreciate its global impact on our increasingly local lives.”

If and when the Championship campaign resumes Leeds must regain the momentum that was serving them so well. Given the likelihood of playing behind closed doors, they will surely have to do this without their adrenaline-supplying supporters and their incessant “Marching on Together” soundtrack. What effect might that have? And how might a layoff involving players training alone at home influence a team whose high-intensity style demands unusually hard, highly intricate daily training-ground drilling.

All head coaches are control freaks to varying extents but for a micro-manager as obsessive as the Argentinian to suddenly be forced into taking such a hands-off approach at a time like this must be particularly disorientating. As his squad cycle and run along Yorkshire’s country roads – especially those surrounding the footballers’ mecca of Linton, near the market town of Wetherby – what on earth does Bielsa do? How does he fill the time normally occupied by his famous daily dust inspection at the club’s Thorp Arch training ground.

Despite his family remaining in Argentina, he has opted to stay on at his modest flat in Wetherby. Bielsa now has little option but to indulge his passions for reading, taking long walks through the adjacent fields he has come to love and, above all, playing an active role in WhatsApp groups created by the players, coaches and medical staff. “This club’s communication has been second to none,” says Cooper. “There’s been a lot from Marcelo on WhatsApp telling us to stay safe.”

Leeds fans cannot wait to once more see Bielsa drinking coffee in Wetherby, posing for selfies in Morrisons and listening to music on his headphones as he makes the hour-long walk to Thorp Arch. For the moment though, they can rest assured he and his squad really are all about “side before self”.