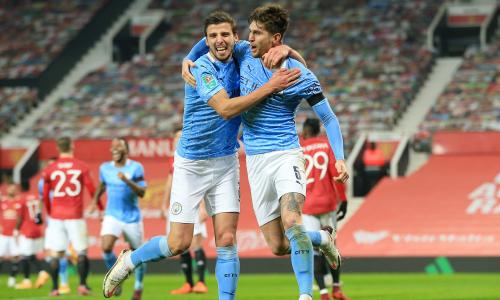 Football feels at times almost wilfully contrarian, as though it delights in confounding those who try to plot a rational course through it. You can plan and plan and plan. You can have a manager who is famous for his attention to detail. You can study all the data, watch all the videos, think and plot and cogitate, formulate your grand strategy, then it turns out the answer all along was John Stones.

Manchester City needed a right-sided central defender, everybody said. They had Aymeric Laporte, who was probably alongside Virgil van Dijk the best central defender in the league, but he prefers the left side, so City’s job in the summer was to find somebody to play alongside him. In that area, it was widely agreed, their recruitment had gone a little awry.

They signed Nathan Aké from Bournemouth for Ł41m, the first senior central defender City had signed since Laporte in January 2018. But one who plays on the left. A squad player, then: cover, back-up for Laporte. Aké played in the first two games of the season, in the second of which City let in five against Leicester. He has started only three league games since, and given the last two of those were against West Brom and Newcastle United, two of the five lowest-scoring sides in the division, it’s fair to say his role is to be used against less threatening opponents to rest the frontline.

But then City pounced. Rúben Dias, for Ł61.5m plus Nicolás Otamendi. A right-sided central defender, the first senior player City had bought in that position since Stones in August 2016. This, then, was the future: Dias and Laporte, the rock on which Pep Guardiola’s new cathedral would be built.

And Dias has excelled this season. Few central defenders have adapted quite so unobtrusively into the Premier League, with all its long diags and elbows and second balls. His unruffled authority, the galvanising effect he has had, has drawn comparison to Van Dijk, which may be premature but is not unreasonable. The difference between City now and the porousness of the Leicester game is profound.

But he hasn’t done it on the right of a central defensive pairing; he’s done it on the left and alongside him is Stones. The solution, it turns out, was there all along.

Stones is one of those unfortunate players who has become a cipher for a wider debate. It’s never just about him or his form: conversations always end up in debates about the nature of defending and how central defenders should behave. As soon as Everton signed him from Barnsley in 2013, he became the icon of a new age: an angular, slightly gawky figure more notable for his reading of the game and his passing than for the more traditional defensive arts of heading, tackling and marking.

It’s a concept with which English football has never been entirely comfortable. Stones made errors, as all young defenders will, as all defenders will, particular those asked to play in the way he is, and each one felt like a blow on the whole concept of defending he represents. The nadir perhaps came in England’s defeat against the Netherlands in the Nations League semi-final in 2019. However many mistakes could be tolerated for the benefits brought by his willingness to pass out from the back, this was too many.

Form and confidence disintegrated. Last season he started only 12 league games. He played only one of the first nine this season. At 26, he felt like yesterday’s man. But then he came into the team against Burnley at the end of November. Since then, when he has been on the pitch, the only goal City have conceded is Callum Hudson-Odoi’s largely inconsequential late strike for Chelsea on Sunday.

Against Manchester United on Wednesday, the Stones-Dias partnership was exceptional again, and Stones’s goal a welcome bonus. United didn’t play badly in a high-quality game, but the threat they offered was restricted largely to a couple of long-range efforts, a handful of set plays and some extremely optimistic appeals for penalties. Fernandinho was superb, not only in his goal, but in the way he protected the space in front of Stones and Dias, stifling Bruno Fernandes.

City this season have been scratchy. They’ve lacked their usual flow. When they drew at home with West Brom it seemed reasonable to wonder whether this might be the worst side of which Guardiola had ever been in charge. But against Chelsea and then again on Wednesday, there was a zip to their football. In 12 games since the defeat at Tottenham, they’ve conceded only three times.

The question was how well the new partnership would stand up against a strong counterattacking side. Here, perhaps, was the beginning of an answer. United beat City three times last season, each time by sitting deep and playing on the break. In the league meeting last month, Guardiola was so concerned by United’s counter he had his side sit off and essentially accept a 0-0. There was no such caution on Wednesday.

City in spells looked back to their fluent best, and that is part down to the sense of security the defence gives them. In Stones’s resurgence, perhaps, there is a reminder that players are not mere bundles of attributes and statistics. They have lives beyond the pitch. Form and confidence can fluctuate. A few bad games, a few bad months, shouldn’t mean a player is written off for ever. They are human and therefore unpredictable. Planning can only ever go so far. This may be a formula that has been stumbled upon, but City are starting to look hugely impressive.