Lorenzo Sanz: the man who recovered the European Cup for Real Madrid 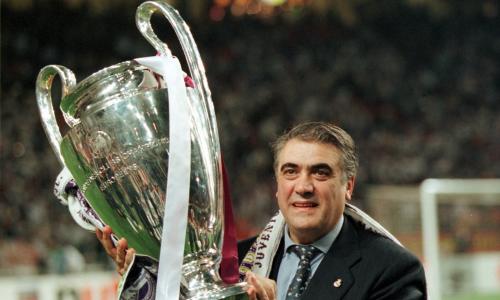 Not long after the 1998 European Cup final, Real Madrid’s president Lorenzo Sanz took a copy of the sports newspaper AS, framed it and hung it in his toilet. The front page ran with the headline “King of Kings”. In the photo, Sanz holds the trophy sitting on the shoulders of two players: Clarence Seedorf and his son Fernando. “How could I ever forget?” he said once. “Every morning, when I wake up and do what I have to do, I see it.”

No one else could forget it either, even if Sanz came to feel his work had not been recognised, deliberately written out of the club’s history. On Sunday morning, after he became the latest victim of coronavirus in a country where more than 1,700 have died, that moment dominates memories of him, the 76-year-old’s role fully embraced at last. This time, AS’s cover calls him “the man of the séptima [the seventh]”. Marca bids “farewell to the man who recovered the European Cup for Real Madrid”.

It is hard to do justice to how big the séptima was: Madrid had waited 32 years to win the competition through which their identity had been forged and it had become an obsession, the pressure almost unbearable. Madrid had been dreadful domestically and, when Sanz called the coach Juup Heynckes to ask how he was shortly before the final, the German replied: “Sunk.” One player recalls them “crapping themselves”.

Yet Sanz’s son Fernando woke in the middle of the night before, convinced that his friend Pedja Mijatovic really was going to score the winner against Juventus, as he had been telling him for days. Mijatovic was injured and shouldn’t have played, but so it proved. There has probably never been a bigger single goal in the club’s history than the one he scored against the Italians.

Some estimates put the numbers out on the streets of Madrid at a million. “We had never seen so many people,” Fernando Sanz recalled. “At the celebration we became conscious of what we had done: it was absolutely immense.”

Lorenzo Sanz promised the octava, the eighth, and in 2000 that arrived too. Yet if the players joyously threw him in the bath, voters threw him out within two months, defeated in presidential elections. Two European Cups and a league in five years were not enough.

Born in Chamberí, Madrid, in 1943, Sanz was the son of a champion amateur boxer and the eldest of 10 children who grew up in the working-class district of Carabanchel. Sport and Madrid occupied his life and that of his family, always proud to have attended the second European Cup final with his dad. He had started going to the Bernabéu aged 10 with his grandmother, who sold water to fans, and he had been a member for almost 50 years. After losing the presidency in 2000, he twice tried to return.

Sanz briefly played in goal for a local tercera división side and his sons were all linked to Madrid as sportsmen: Lorenzo won the basketball league with them. Paco began in the youth system and briefly played for Oviedo. Fernando often stood accused because he was the president’s son – Fabio Capello admitted he was “encouraged” to put him in the team – but made 35 league appearances and built an impressive career at Málaga. Míchel Salgado married Sanz’s daughter Malula.

A self-made man who later bought Málaga and tried to buy Parma – leading to him being arrested for allegedly trying to take art work out of the country as a down payment – Sanz fought accusations of fraud and was fined for tax evasion in 2018. He had started as an errand boy at a barbers’, built a business in printing then real estate and construction, joining Madrid’s board under president Ramón Mendoza, whom he met at the hippodrome. Defeat against Barcelona precipitated Mendoza’s departure in November 1995, bringing Sanz to power.

Sanz was of his time, a generation of presidents as big, loud personalities – fans in the directors’ box. Then Barcelona president Joan Gaspart, another of that ilk, complained of the behaviour at the Bernabéu, saying only the cleaning lady had any decorum. The pair fought but they were friends and Gaspart was devastated at his death.

An imposing but accessible man with a taste for Cuban cigars and card games that ran into the night, money laid down, Sanz had big ideas. “He had a vision to close the gap with Barcelona,” Capello said. “A president with a strong character, a good president. He knew football and the team we built was very, very good.”

Madrid had not even qualified for Europe in 1995-96, so Sanz brought in Capello and signed Mijatovic, Davor Suker, Seedorf and Roberto Carlos to join Raúl, Fernando Redondo and Fernando Hierro. Next, he won a public transfer battle with Barcelona to land Christian Karembeu. Madrid won the league in 1996-97 and, although Capello had not always got on well with the president and was enticed to Milan by Silvio Berlusconi, the European Cup followed in 1997-98. In 2000, they won it again.

Look at the staring XIs, though, and only Raúl, Redondo and Roberto Carlos appear in both, which told a story. As did the fact that Capello’s replacement, Heynckes, was sacked within a week of winning the séptima. That team, nicknamed the Ferrari Squad, were notoriously difficult to handle and Heynckes had given up, “eaten alive” as Sanz later put it.

Despite European success, domestically Madrid struggled – they were fourth, second and fifth in 98, 99 and 2000 respectively – and these were unstable times. Jorge Valdano, Arsenio Iglesias, Capello, Heynckes, José Antonio , Guus Hiddink, John Toshack and Vicente del Bosque: Sanz went through eight coaches in five years and even more players. Steve McManaman was hugely successful; others weren’t. Sanz described buying Nicolas Anelka for 5,500m pesetas as “beautiful madness”, but many thought he was only half right.

When Pérez defeated him at the polls in 2000, it was on the promise to sign Luis Figo and a control of postal votes, but also a perception of financial and institutional crisis. There was an internal power battle that hurt Sanz and debt had risen to almost €300m. He always insisted the worst accusations were untrue, and found it hard to accept being voted out having delivered two European Cups. “History will put me in my rightful place,” he once said.

That place was Amsterdam in 1998, an image Sanz saw every morning for 22 years. “I can die happy,” he said that night.