Like listening to music with no bass: the experience of playing in an empty stadium 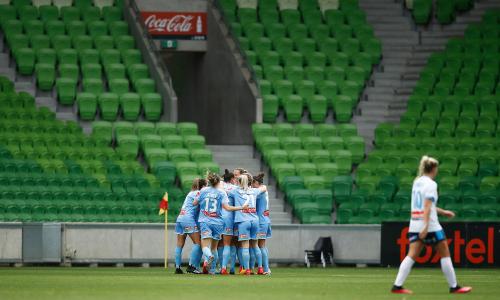 The biggest crowd I’ve ever played in front of was at the Rio Olympics in 2016. It was a quarter-final against Brazil in a packed-out stadium with 50,000 or 60,000 in the stands. What better occasion to play a huge tournament: the knock-out phase against the home nation.

The atmosphere was crazy, you could barely hear yourself think or hear your teammates yelling even though they were only five or 10 metres away. The Matildas ended up losing that match on penalties, but it was a surreal experience and the noise really added something special. That’s what we love: playing in front of packed stadiums, fans being so loud you can’t hear yourself think.

So when we found out a week ago that the W-League grand final – the biggest game of the season – would be played behind closed doors, it was disappointing. We understood why that decision was made, but to have no one there was a weird feeling. You can’t ignore the stands that are completely empty. We’ve played many closed-door matches when we’re in Matildas training camp or pre-season with no fans, and the final felt a bit like that: a friendly or a meaningless game because of the lack of crowd there.

So many sports are about momentum and momentum shifts. It could be something like a big tackle, a goal-saving challenge or a goal; it shifts the momentum in the crowd which then shifts the players’ mentality and the confidence from having the crowd on your side. It’s definitely that 12th-woman feeling when you’ve got that home-field advantage: you’ve got the crowd there backing you, giving you that extra push to get across the line, to make that extra run, to make that last-ditch tackle.

I had that feeling in the Olympic qualifier against China earlier this year, when we were one-nil down, knowing we needed to draw or win and with so much at stake. Seeing the goal in real-time and the excitement of the crowd roaring as the ball hit the back of the net… we were down in the dumps 10 minutes before that and then all of a sudden we were on top of the world. That’s the beauty of sport: it can turn on a dime. Your emotions get thrown up and down. I love those feelings and the emotional rollercoaster you are on when you play. And when you’ve got 15,000 or 20,000 people making the same sighs and cheers and gasps, they’re on the same rollercoaster: we’re in harmony with them on the field.

Knowing that so many people were watching from home is one thing, but to have nobody there when Steph Catley scored the winner on Saturday, having nobody cheering and giving us that extra boost, was weird. We didn’t have that noise behind our own screams and cheers as a group of 11 players. It sounds like you’re listening to music with no bass, like something was missing. There was no real sound other than our own.

It’s really challenging as an athlete to try and focus on doing our job but also acknowledging everything that’s going on without it causing extra anxiety or stress on our performance. I think that has been challenging but also really rewarding: the Matildas were successful in Vietnam to qualify for the Olympics and Melbourne City were successful in winning the W-League championship. That makes me even more proud of my teammates – that we were able to still go out there and put all this weirdness aside and still get the job done. And if the Olympic Games do go ahead, I really hope that fans are able to experience it just as we would, because it’s the fans that make those moments even more special.