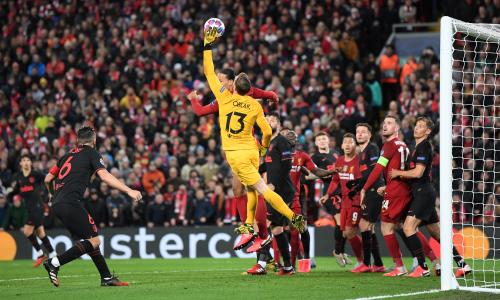 At a packed Anfield on that floodlit night not two weeks ago, before anybody knew Liverpool’s tumultuous 3-2 defeat by Atlético Madrid would be England’s last major football match for a very long time, it was – in sporting terms – a privilege to be there. It was genuinely a great European night, at a ground and club whose very essence is celebrating great European nights, stretching back decades to Bill Shankly’s great rebuilding. That night, before Boris Johnson’s government finally decided “mass gatherings” were no longer so safe in the Covid-19 pandemic, dazzled visitors were as ever taking selfies by the statue of Shankly, with its winning inscription: “He made the people happy.”

Whether it was quite such a privilege to be there in health terms is a question a growing number of Liverpool supporters have been asking. If an inquiry is held in future into the government’s handling of this crisis, it must surely ask how a mega-event, bringing 54,000 people into the old atmospheric streets, pubs, bars, shops, chippies and stadium, with 3,000 from Madrid, was allowed to go ahead at that time.

Explaining the government’s approach that week was Sir Patrick Vallance, England’s chief scientific adviser, who said that if potentially 60% of the population – 40m people – contracted Covid-19, Britain could generate “herd immunity” to the virus.

Vallance explained that while the “vast majority” of people would suffer only a mild illness and herd immunity could thereby be built, “at the same time we protect those who are most vulnerable”.

It was difficult to understand then how the vulnerable – older citizens, people with existing health issues including diabetes, heart and respiratory problems – were being protected. The only government advice was that people who believed they may have symptoms should self-isolate.

Schools were not planned to close, football matches were being played. The lack of restrictions was a concern to the former health secretary Jeremy Hunt, who described the approach as an “outlier” compared to other countries.

On the week of the match, Madrid had become the centre for the spread of the coronavirus in Spain, with 782 of 1,646 confirmed cases. Spain closed its schools on Tuesday 10 March, the day before the match. On the same day, following health advice, La Liga announced that all matches would be played behind closed doors.

So, as Merseyside MPs Dan Carden and Ian Byrne observed, and Maria Eagle, who challenged the health minister Matt Hancock about it in parliament even as Anfield was belting out You’ll Never Walk Alone, 3,000 Atlético fans travelled to watch their team in Liverpool, when their own stadium was closed to prevent the spread of the virus.

Alarm about the British government’s approach was sounded loudly for the first time on the night of the match, by Prof John Ashton, the former regional director of public health for north-west England. Appearing on Newsnight, he described the strategy as “pathetic”, arguing it was failing to protect vulnerable people.

Related: Scramble for childcare in Madrid as schools closed over coronavirus

When asked whether the Liverpool match should have been held, he said he is an Anfield season ticket holder himself but had decided not to go to that most alluring of games.

Ashton is very well known to Liverpool supporters, considered a hero for his actions at Hillsborough on 15 April 1989 when the crush in the Leppings Lane “pens” killed 96 people.

Ashton was there as a fan, and he reacted by trying as a doctor to help organise a rescue operation. Ashton was trenchantly critical then too, outspokenly describing the South Yorkshire police response as “woefully inadequate”, a view fully vindicated at the inquests in 2014-16.

Ashton is still not holding back about the government’s response to Covid-19. He argues it should have followed Ghebreyesus’s plea for widespread testing, to try to identify carriers and isolate them, as South Korea is recognised to have done successfully. “Herd immunity” was a flawed strategy, he argues, which was indeed resigned to millions of people becoming infected, with huge numbers dying and catastrophic consequences for the NHS.

“I think it was clinical and policy negligence,” Ashton argues. He decided not to go to the game when he heard the Madrid fans were going. “It is very likely that some people were carrying Covid-19 and there could be an outbreak because of it.”

I thought it was appalling those Madrid supporters were allowed to come to the city, potentially transmitting the virus

Dan Wakefield, 33, a Liverpool supporter and graduate of Liverpool university’s football industries MBA, was at the game. He has a disability, spinal muscular atrophy, which means he uses a wheelchair and it also affects his breathing. “It leaves me particularly vulnerable to this virus,” he says. He was alarmed at the “herd immunity” idea, and distressed by hearing media reports when people died that they had underlying health problems.

“I thought it was appalling that those Madrid supporters were allowed to come to the city, mingle in the pubs, restaurants, hotels and on public transport, potentially transmitting the virus to lots of people when their own city was becoming a major European hotspot.

“This elevated the risk unnecessarily within Liverpool and was grossly irresponsible.” He is fearful for his safety and that of his sister, a nurse, and mother, 68, who cares for him.

Joe Blott, chair of Liverpool’s Spirit of Shankly supporters trust, said he did ask the club about the policy of continuing to host matches even before the previous home game, against Bournemouth. Liverpool, like all other British football clubs, were following government advice, which was still that mass sporting events were low risk.

Games were still scheduled to go ahead on the following weekend, until the Premier League and EFL decided themselves to postpone matches, now until 30 April at the earliest. That was after the Arsenal manager, Mikel Arteta, tested positive on 12 March, the day after the Liverpool game, and clubs suddenly realised they could not guarantee the health of their own players and staff.

Hancock said, as all ministers have, they were “following scientific advice”, suggesting that suspending the match would not have “the biggest impact”. A spokesperson for the department of health and social care defended the policy, and the government’s timing of measures, which changed five days later to advise “social distancing”.

That followed a report by scientific advisers at Imperial College, who had concluded that the “mitigation” measures being planned “would still likely result in hundreds of thousands of deaths and [the health system] being overwhelmed many times over”.

Last week, universities and schools closed, followed by pubs, restaurants, gyms, cinemas, theatres and museums; a nation was sent home. As all these normalities fell away, it came to seem like another era, not merely days earlier, when it had still somehow been fine for 54,000 people to pack in at Anfield, having the time of their lives all over Liverpool.