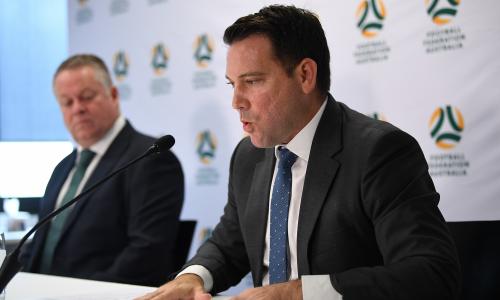 On Sunday afternoon AFL CEO Gillon McLachlan delivered a hammer blow to the code’s fans across the country – just one week into the season the country’s biggest sporting competition was suspending, effective immediately.

It was a decision that was simultaneously brave and inevitable. As the effects of the global Covid-19 pandemic became increasingly apparent in Australia, state governments moved to action. South and Western Australia joined Tasmania and the territories in closing their borders – it was a decision that made professional sport not just a logistical nightmare but increasingly an irrelevance.

McLachlan’s explanation was clear, his action decisive. But it put rival winter codes on the horn of a dilemma. Given the trans-national nature of its competition, the call to suspend the Super Rugby at the end of last weekend’s matches was unavoidable. But for the NRL and the A-League an already fraught pathway towards lumbering on has become virtually impossible.

With an operating surplus last year of $458m, the AFL has something its rival codes simply cannot match: cold, hard, cash. Over the decade just gone, the AFL built revenues from $367m to $794m. It even amassed a $120m future fund. With clubs dating back over 150 years the foundations of the game are solid.

The coronavirus may well prove as McLachlan claimed “the most serious threat to our game in 100 years” – the ramifications of the competition’s immediate cancellation for commercial contracts, broadcast deals, club memberships and operational cash flows are utterly mind-boggling.

But the mere fact the AFL can make this call means it believes it can endure whatever lies ahead.

For Football Federation Australia, the A-League competition is the overwhelming revenue driver for the whole of the game, outside of the four-year national team cycles, hedged against World Cup qualification. Just 15 years old, the league simply doesn’t have the reserves to meet “100 year” threats, especially after club owners accumulated loss-leading deficits of between $150m-200m across the competition’s first decade.

For new FFA chief executive James Johnson, it’s an unenviable choice: face untold financial losses in immediately suspending the competition or run the risk of earning widespread opprobrium for flaunting public health protocols in the face of a pandemic.

That football’s various stakeholders are well aware of the public health ramifications of playing on – not just to players and staff but to the nation more broadly – has been acknowledged. The 11th hour logistical hoops the game’s administrators have already leapt through over preceding weeks to keep matches taking place has been nothing short of extraordinary.

Wellington Phoenix staff and players can already attest to the incredible challenges of having five months in the off-season to plan a campaign, and then suddenly mere weeks in the middle of it to completely redraw flight, accommodation and training plans. With the announcement of border closures in South and Western Australia, Perth Glory and Adelaide United now share their headache.

Immediately following McLachlan’s press conference both FFA and the ARL provided updates regarding their respective codes – effectively, pending intervention from the government or chief medical officer, games would proceed.

The language from NRL’s chairman Peter V’landys has been bullish. Well might rugby league point out it doesn’t have teams in WA or SA, but given the rapid acceleration of Covid-19 infections across Australia day-on-day, events may quickly overrun the code’s eastern coast heartland.

For FFA, the hopes of finishing the competition, even under a revised schedule, have effectively evaporated. Whereas even a week ago one or two more rounds of games might have resolved at least the issue of the premiership, Asian Champions League positions, finals spots or the newly introduced FFA Cup 2021 playoff berths for the bottom two clubs will not be resolved. After Monday some teams will have played 20 games, others 23. There’s no clean kill, no curtain to pull down without chalking off the entire season as one big asterisk.

Related: David Squires on ... the A-League ploughing on through a pandemic

The governing body has suggested it will revisit its position on Monday following the federal government’s cabinet meeting on Sunday evening. The immediate response from political pundits suggest much-sought clarity from the nation’s leaders may not be immediately forthcoming.

For Australian football’s key stakeholders the pressing need now is an exit strategy – a way to suspend matches in accordance with public health expectations, but in a manner that’s not financially ruinous to the game.

The governing body, the players’ union, the clubs, the broadcasters and chief commercial sponsors need to thrash out a financial road map. It could involve guarantees or concessions from broadcasters and sponsors relating to ongoing contractual commitments, wage freezes or sacrifices from players, or FFA, federal government or club owners underwriting the entire competition.

And all of this in a timeframe of days, rather than weeks. It’s an unenviable task and a considerable challenge for a leadership that has only recently taken tentative steps towards more fruitful collaboration.