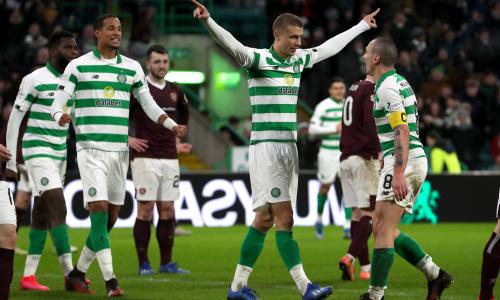 Scottish football doesn’t need fixtures to trigger warfare. Circumstances around Rangers’ financial implosion in 2012 were such that the security of legislators was a live issue and the row over where precisely the club should find itself for the next season so intense that many would now struggle to recall the outcome of that summer’s European Championship (Spain saw off Italy in the final). Administrators warned that Ł16m – and television contracts – could be lost if Rangers kicked off 2012-13 in the bottom tier. A doomed plan was hatched to catapult the club into the First Division.

By October, the tune had changed. “We’ve had to reinvent ourselves but that’s happened pretty quickly and clubs have adapted,” said Neil Doncaster, chief executive of the subsequently rebranded SPL. “The SPL and the clubs have adapted remarkably well to what people really couldn’t ever see happening.” They could even see the upshot on television.

Nobody could have reasonably foreseen League Cup semi-finals taking place at the same stadium on the same day, either. Doncaster tried that trick last season before performing the kind of embarrassing U-turn that highlights why he has been at the forefront of Scottish football for more than a decade. In that period, even Doncaster must have recognised the robustness of the sport over which he presides. The Bosman ruling, 25 years ago, was a supposed death knell for Scottish football. History tells of adjustment to economic crises, social crises and world wars. Scottish football prevailed then, as it will again; whatever its form.

Since coronavirus forced Scotland’s season to a halt, fierce squabbling has surrounded whether the SPFL is entitled to close its setup as matters stand: dishing out titles, relegation and – zing – prize money according to final placings. This would be an affront to the ethos of league football, as is the concept of voiding a season, an idea rightly dismissed. “Any attempt to finish the season with a significant amount of games still to play impacts upon the integrity of sport in Scotland,” said the Rangers managing director, Stewart Robertson, a man fully cognisant of his customer base.

The prospect of the SPFL distributing prize money imminently from a curtailed season naturally appeals to many clubs in these grim financial times. More sensible, surely, would be for the league to provide agreed percentages of said funds now.

Amending 2020-21 – with rules clear from the outset – by cancelling the winter break, postponing the League Cup or a multitude of other options exist should the SPFL’s board have a strong enough will. Instead – and it is very 2012 – a narrative has been allowed to permeate regarding all the things the league cannot possibly do without forcing clubs towards the wall. Weirdly, it’s as if Scotland is in a unique position.

There is no chance the SPFL would contemplate deciding a championship were the Old Firm separated by goal difference with eight and nine games to play. Celtic’s present advantage, of 13 points, should not allow officials to ride roughshod over basic principles. Whenever football restarts, 2019-20 must finish.

Instead, the prevailing mood: for Celtic, nine in a row. For Hearts, relegation; save a legitimate threat of legal action from Tynecastle.

On-field circumstance is particularly stark in the lower leagues. How can Partick be demoted from the Championship when two points adrift yet holding a game in hand? It would be a ludicrous denial of sporting fairness. The league would also be determining only handpicked outcomes if preventing teams from competing in the promotion/relegation play-offs that are an integral part of the competition. The Scottish FA has committed to completion of the Scottish Cup – halted at the semi-final stage – come what may, which undermines consistency of a joint approach.

Why Celtic would accept a trophy when short of standard conclusion is anyone’s guess; this would be a scene worthy of jibes for decades. Celtic’s fiscal power means they can wait as long as it takes for the season to resume and canter across the line. Celtic are entitled to do as they please with their revenue – and have committed Ł150,000 to the most vulnerable in society – but it would have taken them to unassailable high ground had a statement issued last week, calling for a “fair and reasonable solution” to football’s hiatus, also offered to help toiling opposition.

When Hearts announced they had asked staff to take a 50% salary cut, monthly commitments of roughly Ł800,000 too hot to handle, dominos were due to fall. The Aberdeen chairman, Dave Cormack, duly painted a stark scenario after the “healthy financial picture” of just weeks ago. Aberdeen have monthly outgoings of Ł1.2m. “We are facing a collapse of income that is going to be almost impossible to sustain for a prolonged period,” he said.

Rangers announced last November they needed Ł10m to meet obligations before the season ends. A Europa League run, and generous key shareholders, will offset some of that but this is a business with annual staff costs well in excess of Ł30m and no current, serious cashflow.

Many regard discourse regarding Scottish football outcomes as tawdry as society fights a global pandemic. This game, though, is part of said society’s fabric. Maybe it should even be a form of tiny comfort that such a fraught narrative continues at vertiginous pace. And it will, for a while yet.