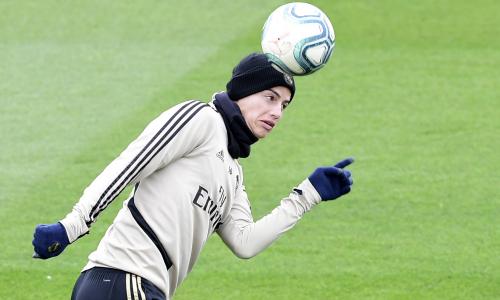 The whole of football may be in doubt but the Mill is still churning and the transfer vultures still circling. And with Tottenham in apparent ďcrisisĒ, Premier League rivals are looking to pick off some prime cuts. And they donít come much more prime Ė when fit Ė than Harry Kane, over whom Manchester United and Manchester City are prepared to have a good old ding-dong, according to reports. They suggest that the England captainís ďrepresentatives are exploring options for a potential transfer away from TottenhamĒ with sources at both Manchester clubs letting their interest be known. Weíre talking big wedge though Ė £150m, no less.

From a World Cup 2018 star to one from the previous tournament, 2014ís James RodrŪguez, who is very much out in the cold at Real Madrid these days. So cold in fact that the relative warmth of the Black Country could beckon, with Jorge Mendes reportedly being summoned into action to ďprepare the machineryĒ for a move to Wolves, according to Defensa Central. Everton are keen too, apparently.

With goalkeepers who can actually stop the ball and reliably play it out suddenly sought-after, Bournemouthís Aaron Ramsdale is on the radar of Chelsea and Tottenham, claims the Mail, in light of the flaky recent form of Kepa Arizabalaga and Hugo Lloris, respectively. And as Spurs mull over that chastening defeat by RB Leipzig, the German clubís Marcel Sabitzer, who stuck two past Lloris on Tuesday, could be a target for Josť Mourinho. They could face competition for the 25-year-old Austria midfielder from their old chums Arsenal, however.

Rumour Mill mainstay Willian may have been more prominent at Chelsea of late, but so too remains talk of an impending departure. Bayern Munich are the latest to stress their interest. For their part Chelsea are still very much interested in the full-backs Alex Telles, of Porto, and Leicesterís Ben Chilwell.

West Ham are pondering a summer bid for Napoliís Hirving Lozano (provided they stay up, one would assume), for a fee close to the Ä40m they shelled out for the Mexico international. Everton and Atlťtico Madrid may prove more tempting options for the 24-year-old winger, though.

In other goalkeeping news, Leeds are expected to pay Lorient the buy-out clause that will land the on-loan Illan Meslier permanently. Another Championship player attracting gossip is the Huddersfield striker Karlan Grant, on whom Aston Villa and West Brom are keen. Grant has hit 16 goals this season.

Chelsea team up with Refuge to help those at risk of domestic abuse It was wrong to play against Atlťtico, says Liverpool's public health director Premier League players may be willing to pay wages of club staff, says PFA Borussia Dortmund allowed to play wonderkid Moukoko from November Brighton's Graham Potter takes pay cut and talks of challenges facing players Pay cuts, furlough or deferrals: what are the Premier League clubs doing? Jonathan David: the in-demand striker with his sights on the very top David Squires on ... how Australia is dealing with life in the time of coronavirus Premier League tells PFA players will have to share in financial pain Premier League clubs fail the smell test by furloughing their staff Bournemouth manager Eddie Howe takes 'significant voluntary' pay cut Uefa puts all football on hold but could target August Champions League finish Football quiz: Premier League managers when they were players Premier League clubs accused of 'moral vacuum' over pay during virus crisis 'Our players are afraid': Nicaraguan football ploughs on amid the crisis Hull's Angus MacDonald on surviving cancer: 'I felt there was no way back' Which great goalscorer has endured the longest goal drought? Former Marseille president Pape Diouf dies after contracting coronavirus Football authorities fear season is unlikely to resume before start of June How Sonny Pike, the wonderkid who fell to earth, is guiding young players

It was wrong to play against Atlťtico, says Liverpool's public health director

ĎIt was not the right decision to stage the match,í Matthew Ashton has said amid concern at rising coronavirus numbers in Liverpool

Brightonís Graham Potter, Paul Barber and Dan Ashworth have taken a significant voluntary pay cut for the next three months