Football transfer rumours: Saint-Maximin in, Jimťnez out at Wolves? 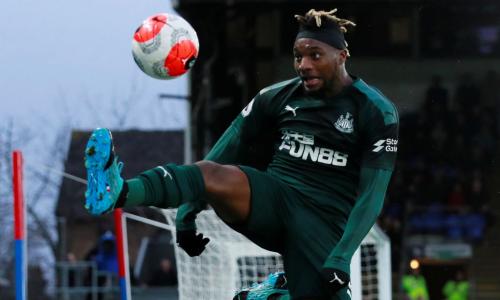 Time was when you could read the transfer runes by deciphering the off-the-cuff utterances of managers as they wound down their car windows; now, itís all about playersí social media activity. What else are we to make of the kerfuffle surrounding the decision of RB Leipzigís Timo Werner to unfollow his own club after they used him in a tweet about Liverpoolís defeat at Watford on Sunday? The fact that the striker has also unfollowed everyone else, thereby denying himself a daily diet of thoughtful and reflective opinion, has not stopped gossip-mongers everywhere from adding two and two and making 10, and concluding that Werner must be Liverpool-bound.

JŁrgen Klopp may face competition for the striker from Manchester United, however, as part of what the Express bills as a mouthwatering transfer battle between the north-west rivals this summer (what with it being a while since these two provided us with a mouthwatering battle on the actual pitch). And not just over Werner either; theyíll be tussling away over Jadon Sancho too, with United prepare to smash the Premier League transfer record by shelling out more than £100m for the young Dortmund striker. Real Madrid and PSG are also interested in him, mind.

Thereís discord in the air at Newcastle between Steve Bruce and Allan Saint-Maximin, according to the Daily Mail, which reports that the mazy-dribbling fansí favourite was dropped for Saturdayís goalless draw with Burnley rather than left out because of a hamstring injury, as Bruce claimed. ďSourcesĒ close to Saint-Maximin insisted he was fully fit. All of which has pricked up ears elsewhere, with Wolves and Crystal Palace reported to be ďmonitoring the situationĒ.

Chelsea ears will also be pricking up at the news that Porto defender Alex Telles, a target of the Blues, has rejected a new deal at the Portuguese club. The 27-year-old left-back is out of contract in the summer, and he might be a more likely recruit than David de Gea, whom none other than Graeme Souness reckons could be added to Frank Lampardís Chelsea squad.

Evertonís spies in Italy, meanwhile, are encouraging the Merseysiders to bid for Napoliís Hirving Lozano. The Mexico international has struggled since becoming the Italian clubís record signing last summer and the fact that Evertonís director of football, Marcel Brands, signed Lozano for PSV, while Carlo Ancelotti was in charge of Napoli when they signed him has inevitably encouraged the rumour-mongers, the Mill evidently among them.

Meanwhile, Arsenal could be interested in Wolvesí Raķl Jimťnez, 28, to replace Alexandre Lacazette if the French forward leaves the Emirates at the end of the season, though given Jimťnez currently has a better chance of Champions League football at Molineux than in north London, that might be seen as something of a sideways move at best. Arsenal are also sniffing around the Sassuolo forward Domenico Berardi, who has scored nine goals this season and generally excelled in Serie A this term, though he is under contract until 2024 so cash will have to be waved around.

Chelsea team up with Refuge to help those at risk of domestic abuse It was wrong to play against Atlťtico, says Liverpool's public health director Premier League players may be willing to pay wages of club staff, says PFA Borussia Dortmund allowed to play wonderkid Moukoko from November Brighton's Graham Potter takes pay cut and talks of challenges facing players Pay cuts, furlough or deferrals: what are the Premier League clubs doing? Jonathan David: the in-demand striker with his sights on the very top David Squires on ... how Australia is dealing with life in the time of coronavirus Premier League tells PFA players will have to share in financial pain Premier League clubs fail the smell test by furloughing their staff Bournemouth manager Eddie Howe takes 'significant voluntary' pay cut Uefa puts all football on hold but could target August Champions League finish Football quiz: Premier League managers when they were players Premier League clubs accused of 'moral vacuum' over pay during virus crisis 'Our players are afraid': Nicaraguan football ploughs on amid the crisis Hull's Angus MacDonald on surviving cancer: 'I felt there was no way back' Which great goalscorer has endured the longest goal drought? Former Marseille president Pape Diouf dies after contracting coronavirus Football authorities fear season is unlikely to resume before start of June How Sonny Pike, the wonderkid who fell to earth, is guiding young players

It was wrong to play against Atlťtico, says Liverpool's public health director

ĎIt was not the right decision to stage the match,í Matthew Ashton has said amid concern at rising coronavirus numbers in Liverpool

Brightonís Graham Potter, Paul Barber and Dan Ashworth have taken a significant voluntary pay cut for the next three months