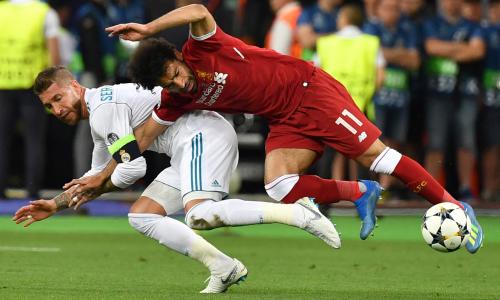 Having done his best to wrench Mohamed Salah’s arm clean out of its socket during the 2018 Champions League final, Real Madrid central defender and red-card magnet Sergio Ramos could be about to renew acquaintances with his Egyptian chum. According to Spanish TV show El Chiringuito de Jugones, Ramos is ready to leave Madrid if they don’t improve their offer of a new two-year deal and with just six months left on his contract could move to Liverpool for Ł15m.

Ajax have identified an opening for a sullen, pouting, perennially resentful striker in their squad and have decided Sébastien Haller is the perfect candidate to fill the role. Despite paying Ł45m to bring the 26-year-old Ivory Coast international in from Eintracht Frankfurt in the summer of 2019, West Ham are ready to cut their losses and let him go for a little over half that amount.

Elsewhere in the West Ham departures lounge, Robert Snodgrass is on the verge of a move that could scarcely be more “Robert Snodgrass” if it grew a beard, spoke in a thick Scottish accent and said: “Hi, my name is Robert Snodgrass.” Surplus to requirements at the London Stadium and with his contract due to expire in the summer, the 33-year-old winger is in advanced talks with West Brom regarding a permanent deal.

Speculation over the next move of Arsenal outcast Mesut Özil rumbles on and on, with speculation linking him with a move to MLS franchise DC United being contradicted by reports from Turkey suggesting he has agreed to join Fenerbahce. His agent, meanwhile, claims his future remains completely up in the air. “There is a possibility in the next seven to 10 days, things will become far more clear,” said Dr Erkut Sögüt, in conversation with Sky Sports. “There has been no direct contact from any club regarding Özil.”

Struggling in front of goal following the loss of Raúl Jiménez through injury, Wolves are considering the recall of striker Patrick Cutrone from his loan spell at Fiorentina. The 23-year-old has had a torrid time in Italy, failing to score in 13 appearances for a Serie A side who no longer want him. If Wolves decide he’s not the man to fill Jiménez’s big boots, they might ship him out to Marseille instead. “Patrick is 22 and wants to find space to continue his growth,” said Fiorentina director of sport Daniele Pradč to Corriere dello Sport. “We can’t guarantee it, therefore we need to be good at finding a solution together, Wolverhampton included.”

Having made just two appearances for Tottenham Hotspur this season, both in the Europa League, Jack Clarke could be sent out on loan to get some playing time under his belt. A raft of Championship sides including Coventry City, Middlesbrough, Stoke City and Swansea City are all reported to be interested in the 20-year-old winger who joined Spurs from Leeds United in the summer of 2019. Bombed out at Tottenham, Danny Rose is in dire need of a move and could be off to Trabzonspor, while third-choice goalkeeper Paulo Gazzaniga is also looking for alternative employment.

Meanwhile in Ecuador, Independiente del Valle have denied talk that they have been contacted by representatives from Manchester United, who want to sign midfielder Moisés Caicedo. The first player born this century to score a goal in the South American World Cup qualifiers, the 19-year-old from Santo Domingo is also believed to be the subject of interest from Chelsea and Everton, and has been described as “the real deal” by no less an expert than the BBC’s South American football correspondent Tim Vickery.

And finally, Everton are ready to duke it out with Serie A side Roma, in the battle for Lille’s Turkish right-back Zeki Çelik, while the Merseyside club’s 18-year-old centre-back Jarrad Branthwaite looks likely to head out on loan to Blackburn Rovers, Sheffeild Wednesday or Preston.