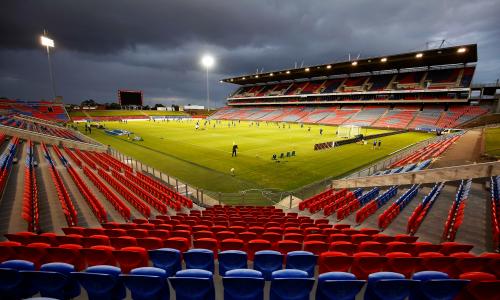 The A-League has been postponed with a few rounds of the regular season remaining, bringing all top-level sport in Australia to a halt as a result of the coronavirus pandemic.

Football Federation Australia announced on Tuesday morning the competition would be put on hold for the foreseeable future with the “heartbreaking” decision to suspend competition to be reviewed on 22 April.

FFA remains optimistic of resuming the 2020 season at some stage, although CEO James Johnson admitted concern over the impact of the decision on the governing body’s finances.

Related: On the horns of a dilemma – finding an A-League exit plan | Richard Parkin

“As a national competition played in all parts of Australia, as well as New Zealand, mission complicated became mission impossible,” Johnson said.

“We will feel this. We will feel the financial pressure on the game at all levels. “The game will survive ... will we need to make changes? Be different? I say yes.

Monday night’s game between Newcastle and Melbourne City, won 2-1 by the Jets, proved to be the last for the time being, despite FFA’s hopes of playing out a condensed version of the season.

“To get so close to completing the competition, only to pull up a few weeks short, has been heartbreaking for the players, clubs and fans,” Johnson said. “That said, the health and safety of our fans, players, volunteers and staff has always been the overriding consideration for us.

“That is fundamentally what led – with the unanimous support of the state and territory member federations – to the suspension of grassroots football until 14 April 2020. Today’s decision was equally difficult to make but it is borne form the same rationale.

“As the largest club-based participation sport with nearly two million participants, we have a clear and obvious duty to play our part in doing whatever we can to support the efforts to slow down the spread of Covid-19.”

Related: Like listening to music with no bass: the experience of playing in an empty stadium | Kyah Simon

The A-League was one of few major sporting competitions globally still running at the beginning of the week, but the federal government’s advice on Monday against all non-essential travel within Australia effectively made the continuation of the season untenable.

The decision follows that of the NRL on Monday to suspend its season indefinitely, while the AFL had put its men’s competition on hold a day previously and cancelled outright the AFLW season.

The W-League season was able to be completed over the weekend, with Melbourne City crowned champions after the grand final was played in an empty stadium.

The decision to put the season on hiatus received the approval of the players’ union and Professional Footballers Australia CEO John Didulica said the break could be used to the game’s advantage.

“During the league’s pause, we can take some control back by ensuring the players can work with FFA, the clubs, the broadcasters and the government to collectively secure the professional game’s future.”