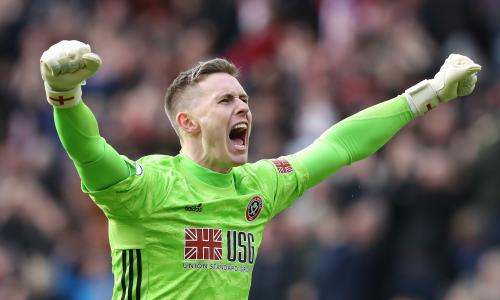 Following the latest in a long line of excellent displays for Sheffield United against Norwich City on Saturday, on-loan goalkeeper Dean Henderson is reported to have been telling teammates that his parent club, Manchester United, have guaranteed him first-team football football next season although not necessarily as a replacement for David de Gea. If the Spaniard remains at Old Trafford and stays fit and in decent form, Henderson may remain at Bramall Lane, although reports in today’s press suggest Chelsea would like to bring the 22-year-old to Stamford Bridge. With Kepa Arrizabalaga’s future under Frank Lampard shrouded in uncertainty, Chelsea are also reported to be interested in Barcelona’s Marc-André ter Stegen, should the German agitate for a move away from the Camp Nou.

Tottenham central defender Jan Vertonghen will be a free agent in the summer and Inter are ready to make him an offer he’ll find difficult to refuse. The word in Italy is that Stefano Pioli is also ready to try to lure Arsenal striker Pierre Emerick-Aubameyang to Milan, by leaving a trail of breadcrumbs between the Emirates and San Siro. Still struggling to nail down a first-team place at Manchester City, John Stones could renew acquaintances with his club’s former assistant manager Mikel Arteta at Arsenal, whose considerably more slapstick approach to defending might be more suited to a man of his talents. Arteta is also believed to be harbouring notions of reintegrating Armenian midfielder Henrikh Mkhitaryan into the Arsenal squad once his loan spell at Roma concludes.

Borna Barisic has caught the eye playing at left-back for Rangers this season and will leave Ibrox during the summer according to his agent. With more than three years left on his contract, the Croatian is valued at Ł22m and has been heavily linked with a move to Tottenham. “Rangers won’t be able to keep Borna after the season he’s had, even though he’s just signed a new contract,” said Ives Cakarun. “Borna’s priority right now is Rangers, who have made significant progress this season under the management of Steven Gerrard.” The 27-year-old has also got antennae twitching in Italy, where both Roma and Milan are eyeing his situation with interest.

Having lit up the league with his occasionally chaotic but often effective performances on the wing for Newcastle, Allan Saint-Maximin is wanted by Everton. Newcastle, who paid Ł16.5m to bring the Frenchman to St James’ Park from Nice last summer, could realistically hope to double their money for a player that is also wanted by Crystal Palace. With Wilfried Zaha expected to leave Selhurst Park this summer for pastures unspecified but more glamorous, Roy Hodgson is in the market for a replacement for his team’s most important player.

And finally, Rumour Mill staple Timo Werner remains a long-term target for Liverpool, with German newspaper Bild reporting the Premier League champions elect may sign him this summer and then loan him back to the Bundesliga outfit for one more season before bringing him to Merseyside.

• This article was corrected on 11 March 2020. An earlier version stated that Marc-André ter Stegen is Dutch rather than German, and suggested that Roberto Mancini, not Stefano Pioli, is the current manager of Milan.